How to make spoked wheels

A bicycle wheel consists of rim, hub and spokes. Usually there are 36 spokes, which means exactly ten degree spacing. Spokes alternate on the rim: even ones make left side and odd ones right side (or vice versa, never mind). On every side they alternate further: even ones go clockwise and odd counterclockwise. Every spoke crosses three other ones. A complete wheel looks like this:

First step is to create a rigging template. Start by drawing inner diameter of the rim and outer diameter of the tyre - we usually know these dimensions exactly. Then guess the diameter of the hub (if the crossing goes wrong, we'll correct it - more about it later) and draw first 9 spokes. Draw the lines from points on the inner side of the rim (40° spacing), tangentially to the hub:

Try to draw several spokes with opposite orientation (green on this picture) and check how many times they cross:

If twice or less, make the hub bigger. If four or more times or if the third crossing is too far from the centre, shrink it. When you like the result, draw the remaining spokes:

Now the template is complete. Glue it to some thick material, ideally several layers of corrugated cardboard. Stick some nail in the centerpoint, it should have about the same diameter as the hub you have previously drawn (it doesn't have to be a nail, but it must be something the glue won't stick to). 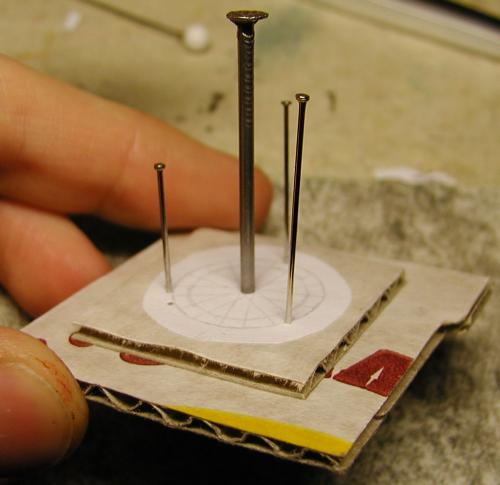 Prepare a cardboard ring the size of rim and tyre, place it on the template and secure it by three pins around it: 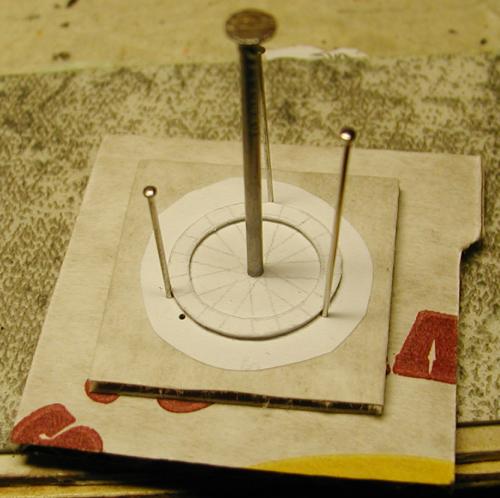 Get a spool of sewing thread (usually the thinnest one you can find). It's a good idea to run it between your fingers with a drop of glue to make it less furry (I didn't do it here and you can see the result :-)). Start to glue the thread onto the ring: 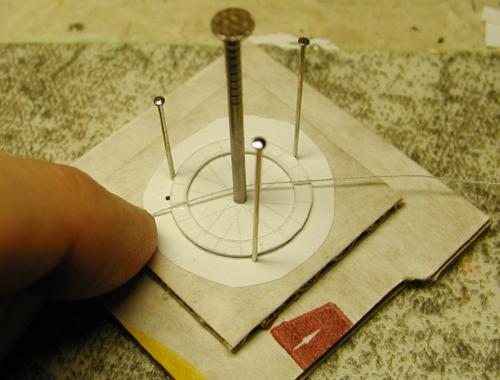 Joint by joint, let the glue set before you proceed to next one: 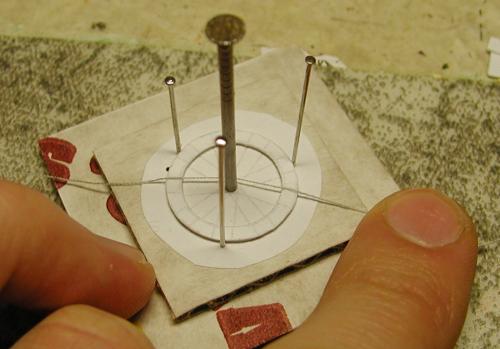 Don't tighten the threads too much - just keep them straight, but no excessive tension, because you will later have to push the whole spoke web to one side by half the width of the hub and that will tighten them quite firmly. 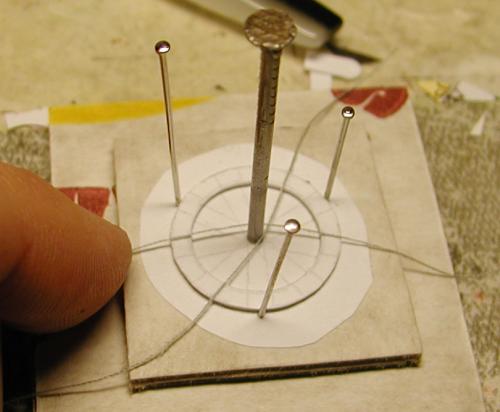 Etc. (it's quite tedious work, but the result is worth the time). There is no need of any particular order of gluing the spokes. 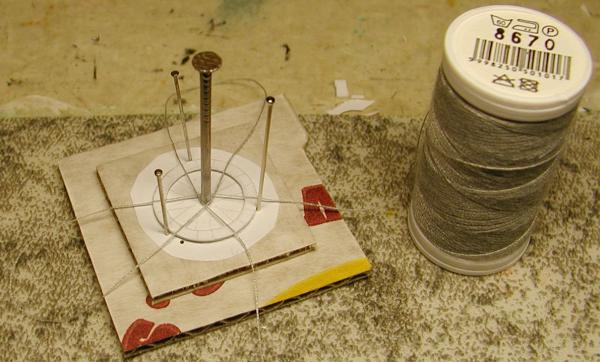 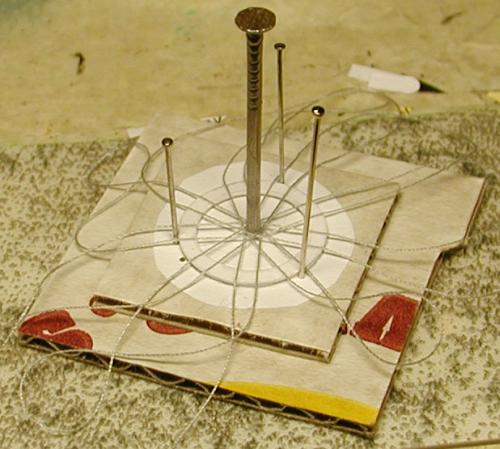 If the hub is big enough (drum brakes etc.), spokes converge towards the rim. You can save a lot of time by placing nine pins in the intersection points and winding and gluing the whole web at once: 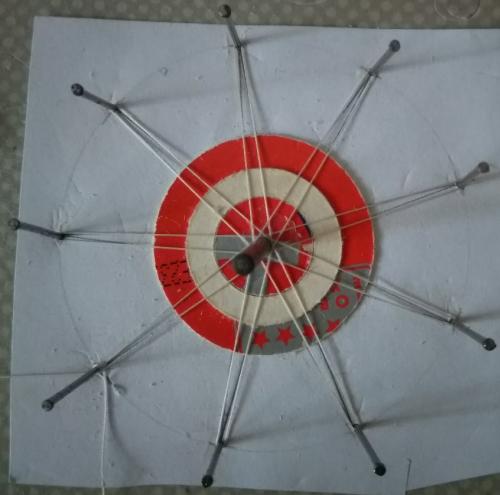 (invented and photographed by Veteran 68. Thanks!)

Carefully glue the spokes together in the center (don't pour the glue too far): 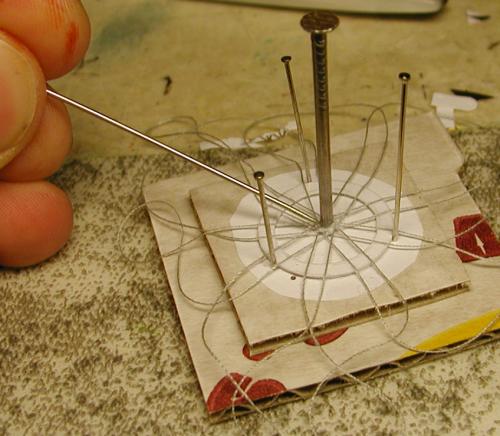 When the glue is dry, take it our from the template: 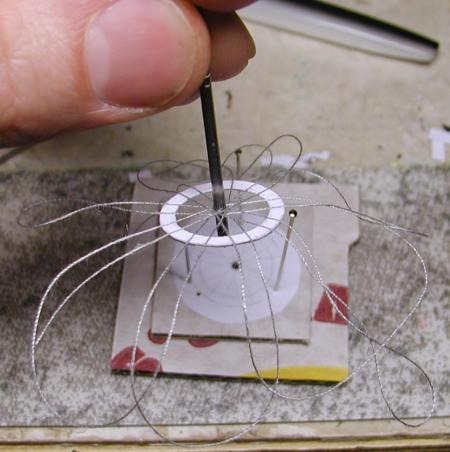 Repeat the gluing on the other side to make sure no thread remains loose: 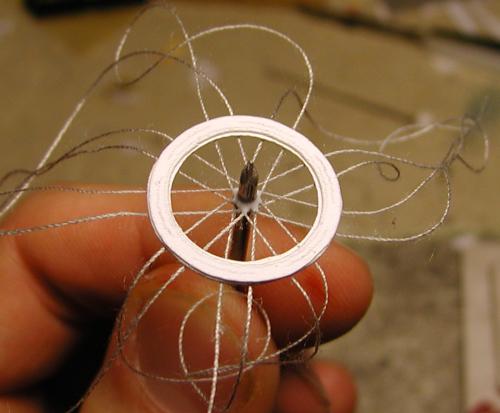 When the glue is perfectly dry, twist the nail out carefully and cut the excess glue away with a sharp razor blade: 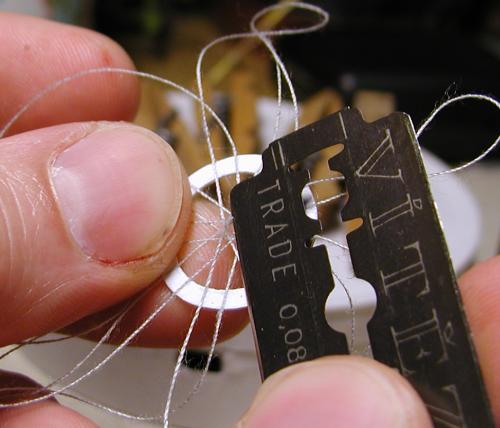 Cut the excess threads away with some sharp scissors: 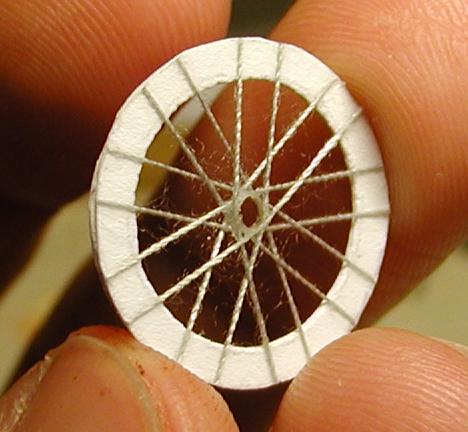 Half of the work is done. Now do the same once more...

When both halves are finished, roll the hub from a strip of paper: 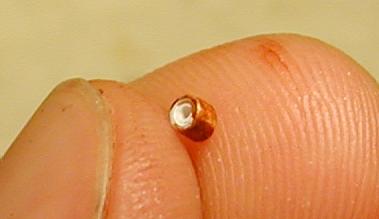 Glue it to one half of the wheel, keep it square to spokes with a piece of wire (future axle): 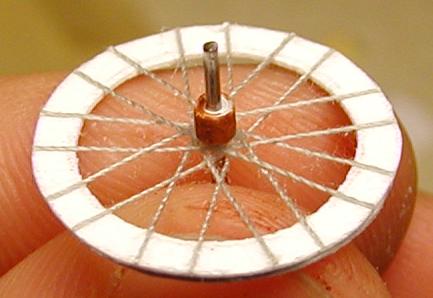 If you want to paint the spokes and hub with a brush, do it now - after assembling the halves together, your only option would be airbrush or spray can.

Glue both halves together by whole rim/tyre surface (don't glue the hub yet!). Position it so the spokes are spaced evenly. Secure it by clothes pegs or something similar and let the glue dry perfectly: 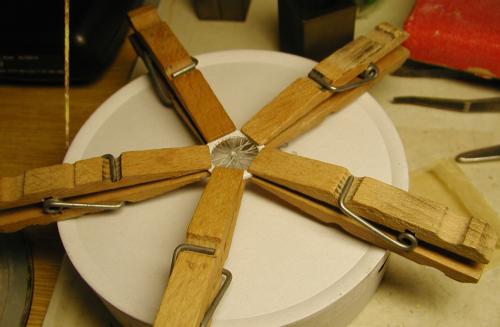 The grip must be quite strong. The smaller the wheel, the wider the hub or the more preload in the spokes, the stronger. And be careful, the wheels like to twist.

When the glue is dry (letting it overnight is the best choice), remove the pegs: 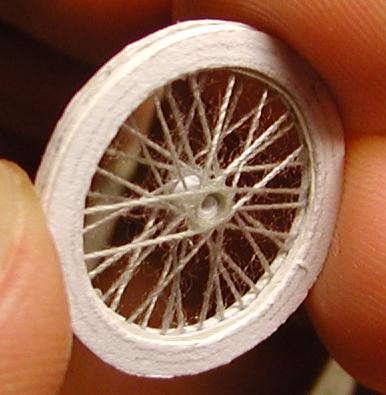 Slide the wheel on the axle, align the hub to be perpendicular to the rim and glue it on the remaining side to the spokes. Sand the tyre round. You can also glue small circles of paper to the sides of the hub so it stops to look as if the bearing balls fell out.

Cross-section of the finished wheel for the sake of completeness (threads are red):